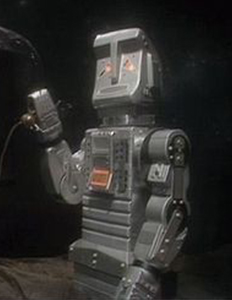 To mark Towel Day (a tribute to the late, great Douglas Adams and his work) we have put together an NPC for HARP-SF. I am thrilled (though he is not) to introduce you to Marvin, the manically depressed robot!

Marvin was created by the Sirius Cybernetics Corporation and imbued with “Genuine People Personality” (GPP) technology to give him a more ‘human’ personality. Unfortunately, the people at the Sirius Cybernetics Corporation failed to realise that some (or in Marvin’s opinion most) people have dreadful personalities that do not really warrant imitation. As such, Marvin is incredibly depressed and incredibly depressing to be around for any length of time. He is in fact so depressing that the vast majority of biological or mechanical organisms would rather experience Spontaneous Massive Existence Failure than attend a dinner party with him. In some ways this makes him a useful ally as enemies will literally flee from the endless dreary monotone that is Marvin’s constant complaining. On the other hand however, he is incredibly annoying.

No one is entirely sure where Marvin has been, what he has done, where he is going or what he is planning on doing when he gets there. He has a brain the size of a planet and has concluded that everything is pointless and so has dedicated his existence to floating around the universe complaining about how thoroughly dreadful it is.

Appearance
Marvin is 6’6 tall and of a vaguely humanoid appearance. He suffers from an angular and unpolished design that gives the impression that he was designed at 5:25 PM on a Friday when the designer had somewhere to rush off to. A very simplistic robot, he was created to blend perfectly with his human masters both in form and personality. Unfortunately, I don’t think the designer had ever seen a human being let alone studied one and the less said about the personality the better.

Adventure Suggestions
An ancient relic of a bygone civilisation is said to lay in the outskirts of the known universe where pirates and the worst kind of scum lurk. They say the relic is a computer. Faster and more powerful than anything that has ever been seen before or since. Your adventurers must track it down, avoid being slaughtered or captured by the evil that terrorises this area of the universe and then try not to kick him to pieces when you realise that the relic is Marvin. He’ll fetch a good price if you can get him to market before the adventurers lose all hope and succumb to his depression.

A strange looking ship suddenly appears before your adventurers. Unlike anything anyone has ever seen before, the craft hums quietly as a hatch opens in the perfectly sculpted body of the ship and a painfully cool set of stairs descend to the ground. Out of this mend bendingly good looking ship, this testament to form and function, this one of a kind star explorer comes Marvin – and he’s not happy about it. “What a dreadful ship”. It would appear that parts of Marvin’s memory banks have been removed or damaged as he has no idea how he came to be on board it, but the body of an alien prince which is discovered in the engine room will cause all-out war if the adventurers can’t get to the bottom of it soon.

It is a well-known fact that every star system has at least one good bar, but none of them compare to Rakatesh Wooply’s Intoxicating Beverage Emporium (except perhaps Milliways), but something has gone wrong. All the electronics on the planet have failed. Even Rakatesh Wooply’s bionic arm has given up. The last intelligible reading that they could get from the planetary main frame was: “Oh, what’s the point”. Your team of adventurers must search out the reason behind the disruption and put a stop to it.

Your adventurers are employed by a famous travel guide company to explore the outer reaches of the universe and report back on the primitive life forms that reside there. There is only one catch. You will need to take Marvin with you. He will relay all your entries back to the company. You get paid per entry so make sure you report back on as many different flora, fauna, religions, cultures and great places to eat and drink as possible. The money is good so long as Marvin doesn’t get you killed (or more likely you leave the system without him).