To the seventy-seventh Briefing and the tenth scheduled Briefing of 2017. 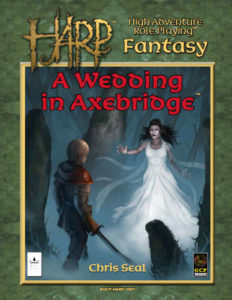 The pdf edition of A Wedding in Axebridge has been released on OneBookShelf and is available now.

Buy A Wedding in Axebridge >>

A Wedding in Axebridge is an adventure module for four-to-six low-level heroes. It is set in the world of Mithra, but in an archipelago of the Shatterings far from the continents of Anias and Cyradon.

It has been updated to be consistent with HARP Fantasy and indeed its monsters are consistent with HARP Bestiary. It has new art and new cartography. One of the maps is not as clear as we would like so Terry and Joel have been collaborating to improve this. Once we are happy, we will upload an updated version of the pdf file to OneBookShelf so that everyone can have the best possible version. We will also be producing a slender softcover print version – this will be staple-bound, Axebridge is just too low on page count for a viable perfect bound cover.

Terry reports that he is closing in on completing his writing and reworking of the enhanced version of Jaiman. He is hinting that Emer IV is singing a siren song for his attention once Jaiman is finished.

I have been working on making revisions to the manuscript previously known as Something Wicked. The professions chapter has been duly revised and is marked done on my todo list. I have also revised the chapter on sorcery, a demon-inspired magic where knowledge of the truenames of Demons enables its practitioners to compel or bargain with these infernal beings. I am currently deep in a third chapter, wrestling with Greater Rituals and mana sources.

The manuscript formerly known as Something Wicked introduces five new types of mana that characters may utilise, namely black mana (an aggressive form of ambient mana), dark mana (sourced from Demons and the Abyss), elemental mana (sourced from the elemental plane), raw mana (sourced from the ethereal plane) and red mana (taken from life-force). It is quite possible that a character might wish to be able to draw upon multiple source of magical energy. There is an implicit assumption within the HARP rules that characters only develop one Power Point Development skill. Justifying how a single Power Point Development skill can cope with the varying natures of the mana sources and in particular the varying recovery rates among sources if a caster has the ability to tap two or more sources is challenging. GMs run the risk of requiring players record which spells used which mana (increasing book-keeping) or imposing ruling by fiat (the mana choice for the first spell of the day dictates the recovery rate for the rest of the day). Messy. However, nowhere in the published HARP rules that I can find have we explicitly ruled that characters may only learn one Power Point Development skill. So the simple solution is to declare that characters who wish to use mana from multiple sources need to possess the requisite Tap talents and need to develop Power Point Development skill for each mana type. As characters have varying racial Power Point bonuses, the racial Power Point bonus may only be applied to the primary mana source chosen by the character. This will prevent magically focused races becoming more powerful and will dissuade some players from buying 10 ranks in multiple PP Development skills just to optimise Development Point expenditure (as this is the obvious rules abuse.)

Jonathan and Joeri are battling with RMU Creature Law. I am pleased to report that they have broken through the logjam of the megaspreadsheet covering 843 creatures, which is a major victory. The creatures now have to be updated in line with the spreadsheet.

Back to editing material and revising more of Something Wicked. The next scheduled Briefing will be in November 2017.