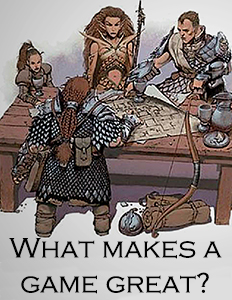 Regardless of which tabletop roleplaying game is your favourite, everyone who has ever played an RPG, whether as a GM or as a player has got a story to tell about it. Whether they are perfectly timed critical hits, hilarious critical failures, epic stories, life-long friendships or perfectly rounded characters, everyone has something to say about “this great game I played in once”.

With that in mind I wanted to see if there was some commonality about these ‘great’ games. Is there a recipe for success? Can GMs follow a step-by-step guide and create a game that people will be talking about for generations to come? We asked our fans and followers what they thought made a game great and here are the results.

First off, we asked people how much they felt certain aspects of a game contributed to making it great. What follows are the game elements from most popular to least popular with their weighted scores. To be clear, we weren’t asking what made an RPG system great but what made an individual game run by a GM great.

While the results don’t show an obvious winner, it is clear that an engaging story and a GM with the talent to carry the story off and help players remain immersed in their world for the duration of the game are the keys to success.

While it doesn’t show any huge surprises in terms of what people look for in a game, I was a little surprised to see that “players that you get along with” and “lots of combat” were as low as they were.

In addition to this, we asked respondents if they had any other comments on what they felt made a game great. Though we can’t show all the responses, below are a few of the more thought-provoking ones:

What are your thoughts on what makes a game great? Is there anything you think we have missed or anything you disagree with? The survey is now closed but you can still have your say on the ICE forum.