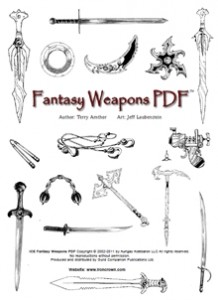 A huge thanks to everyone who has bought and support Rolemaster Fantasy Weapons! We’re very proud to announce that this great little supplement has now reached the status of ‘Copper Pick Product’ on RPGNow.

Less than 10% of products on RPGNow are rated as ‘Copper Pick’ products and we’re excited to see another product reach this level, especially after the recent success of the Rolemaster Combat Minion – Rolemaster Classic Edition which has now progressed from ‘Copper Pick’ to ‘Silver Pick’.

If you haven’t done so already you can pick up Rolemaster Fantasy Weapons for just $3 from RPGNow. It contains information and attack tables for sixteen new weapons for RMSS/RMFRP.