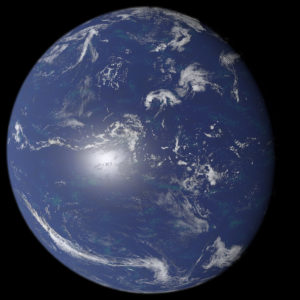 Name: Seccanoe
Diameter: 14,037km
Gravity: 1.2 g
Distance from sun: 0.87 au at its closest 1.42 at its furthest
Year: 1.13 Earth years (412 Earth days)
Rotation period: 21.25 hours
Atmosphere: Oxygen rich with carbon and nitrogen
Hydrosphere: In ‘winter’ glaciers cover 42% of the surface of the planet with other bodies of water covering a further 5%. During ‘summer’ the glaciers only cover 17% with a further 72% of the planet covered in water.
Climate: Extremes of hot and cold depending on season
Population: <10k

Seccanoe is a rocky planet with an oxygen rich atmosphere orbiting a yellow dwarf star. The star is similar in size to the Earth’s sun but slightly more massive. Seccanoe is one of only three planets orbiting the star and is the closest planet to the sun. Seccanoe has an elliptical orbit with .55 au difference between its closest and furthest points.

Due to its elliptical orbit, Seccanoe is a planet of extremes. When it is furthest from the sun, the temperature at the equator drop to an average of 2oC. At this point, a lot of the water on the planet becomes locked in huge glaciers at the poles where temperatures can be as low as -80oC. When the planet is at its closest to the star, the temperature on the equator can reach highs of 70oC. At these temperatures, the vast majority of the water stored in the glacier melts and the planet is flooded with water. Due to the extremes in weather caused by the elliptical orbit, the seasons on Seccanoe are not marked by the tilt of the planets axis but my its proximity to the star.

The ebbing and flowing of the waters on Seccanoe are at the centre of its ecosphere. The planet is home to a wide variety of plant life. Though some of it exists in year-round waters or on peaks that are never reached by the flood waters, the majority of plant life has adapted to live above and below the waterline. While water-based and land-based creatures exist on Seccanoe, they are relatively rare and tend to be smaller due to the lack of resources available to them when the waters are not in their favour.

The vast majority of creatures on Seccanoe are amphibious. Some of the planet’s amphibians have grown to the scale of blue whales and larger. There is also a wide variety of different birds and winged creatures. The majority of these have evolved to spend long periods of time in the air, only landing to mate and raise young. While many creatures on Seccanoe are carnivorous, during the spring and autumn months, the abundance of food means that the planet is relatively safe. When resources become scarcer in winter and summer however, everything edible is at risk.

The planet is home to a few thousand sentient beings. For the most part these are explorers and adventurers that enjoy making their home in such unrelenting extremes. They tend to be nomadic hunter gatherers who have turned their back on modern conveniences. There is also a small contingent of eco-warriors who have set up base on Seccanoe to defend its eco-system and prevent it from being pillaged for resources. At the moment no one is that interested in Seccanoe and its resources.