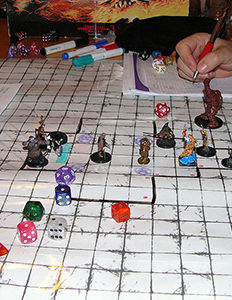 One of the best things about tabletop RPGs is the fact that anyone can play. All you need is a pen, paper and your imagination (well… at least one of you also needs to have the rulebook as well). However, there are a lot of tools on offer which can enhance or simplify game play without destroying the essence of role playing. With that in mind we thought we’d ask our fans and followers which tools they used and how effective they thought they were.

One thing that is interesting but probably unsurprising is how few people use electronic devices or aids in their gaming. While 65% of people used miniatures only 46% use word processors with even fewer using tablets (37%) and online tabletop platforms (35%). Perhaps people find the use of devices distracting or an unnecessary hassle given that long term players have grown up without any of these aids. It would perhaps have been interesting to have asked for respondents ages to see if younger players are more open / rely more heavily on electronic aids.

According to the survey results, the one tool that people should be using more often is graph paper. Only 47% of people said that they used graph paper and yet it ranked second in the list of most useful tools (with a score of 3.29 out of 5).

We had some great responses to ‘what would your perfect RPG tool look like’ including “None. Pen and paper work just fine”, “A speech recognition combat helper” and “A system that records video and audio of all sessions, and uses that to create (in real-time / constantly) an interactive text document with all that happened, with easy search tools”.

Thanks to everyone who took part in the survey. If you’d like to give your opinion on the findings or to continue the discussion, please visit our forum.

Below are the results in full, do you agree? Are there any tools that you would like to see?


Which of the following do you use when playing tabletop RPGs?

How useful would you say the following tools are when playing tabletop RPGs?

How often do you try new tools?

In a perfect world what tools would you like?

Something like Realm Works but with these added options: A game calendar where you can set the calendar up much like in Aeon Timeline, and an “individual” player reveal state. It would awesome if there was also an integrated VTT program like Mote or Maptools.

Rulesets for Fantasy Grounds is the big one. Also like art/maps to show the players. Everything else I can easily do with Excel/Word

Software that allows .mp3 files to be accessed via assigned hot keys so background music and effects files can be played and mixed simultaneously. Software and/or spreadsheet that generates NPCs quickly would be great for random encounters that need a touch of detail

Something like Fantasy Grounds, but with Realm works campaign management….

AI powered 3d visualisers that know what I mean, not what I say.

A system that records video and audio of all sessions, and uses that to create (in real-time / constantly) an interactive text document with all that happened, with easy search tools (who said what, which player requests to the GM are still pending, etc).

Table size tablet with a program for mapping, spreadsheets etc.

I would love to see the John dale rmfrp character sheet integrated with the roll 20 system.

A well thought out and designed character sheet. Most waste space with logos and dark background art.

I have seen someone use a Wii remote to recognize miniatures on the table and show movement ranges and area affects. Something like that would be great if I didn’t have to build it myself.