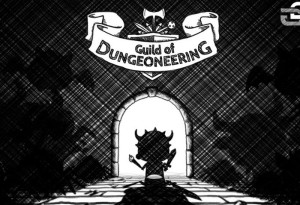 It took me a long time to figure out what to review this month. I originally wanted to review a board game but I quickly came to realise that all the games I own are either featured on Will Wheaton’s ‘Tabletop’ or are products of kickstarter. So instead I decided to review a computer game and I knew just the one. I have seen a few mentions of ‘Guild of Dungeoneering’ recently and thought it a perfect opportunity to buy it and give my perspective on this very… individual game.

Guild of Dungeoneering describes itself as ‘a turn-based dungeon crawler with a twist’. Forbes Online described it as ‘a cute little card-based RPG’. I would describe it as a cute, turn based, deck building, dungeon crawling RPG with a number of funny twists.

In ‘Guild of Dungeoneering’ you are the master of The Guild of Dungeoneering (duh!). Your main goal is to build the biggest and best guild ever. To do this you need to expand your guild building by accumulating wealth. To accumulate wealth you have to (you guessed it) loot dungeons. Unlike other turn-based RPGs, you don’t take charge of the dungeoneer to achieve this looting, instead you build the dungeon around him, using the selection of cards you have available and hope the he does as you wish.

‘Guild of Dungeoneering’ is currently available through steam and gog.com for £10.99.

You can’t help but love the way this game looks. The rough, hand drawn appearance gives the game a great quirky (and slightly dark) feel and lends the whole game an air of childish fun (a theme that continues throughout).

It’s not just the games look that is so pleasing either. When I first downloaded the game I scoffed at the fact they also offered the game’s soundtrack to download for £5.99. “Why would anyone want that?” I thought. My playing of the game has genuinely been slowed by my not wanting to miss a single song. Throughout the game, as you build new rooms in your guild, conquer fearsome monsters and (sadly) watch your dungeoneers be conquered by even fiercer monsters, you are accompanied by a bard who sings little ditties praising (or mocking) your achievements. Much like the games look and feel, these ditties are often dark, sinister and hilarious.

As much as I love the soundtrack, there is an air of Brave Sir Robin’s bard about it. After two hours game play I still find it funny but I’m pretty sure that sooner or later I will echo Brave Sir Robin’s “That’s enough music for now, lads” as it probably will start to grate on me, but that’s why computers were built with volume control.

The game play is simple but deceptively difficult. You upgrade your building by looting gold from dungeons. Building upgrades offers new guild members or other add-ons that can be used whilst dungeoneering. When you are in the dungeon, you are at the mercy of your guild member’s whim. You build the dungeon around them and coax them with loot and monsters, but ultimately you have no control over what they do.

Combat is a simple card based mechanic. Which cards you have in your deck depends on which guild member you are using and which items you have equipped. In the first few levels it was disastrously easy to defeat enemies and I figured that maybe the combat system was what let down an otherwise fine game. I soon realised however that it got harder, a lot harder. Two hours in and I think I have ‘lost’ six or seven guild members to various dungeon monsters. The idea is that you need the loot to improve your stats to be able to take on the bigger monsters. The problem is that even WITH the loot, you sometimes get duff cards. On top of that, you may know you’re not ready to take on ‘the boss’ but your guild member doesn’t.

My ONLY real gripe with the game is its price. It is a really fun game but pretty two-dimensional in terms of aesthetics and gameplay. That’s not a bad thing. I for one love quick and easy games. I rarely have the time for anything too big and time consuming but like the excitement that a good computer game can offer. The problem is that there are some really great games for mobiles that are free or very cheap. As good as this game is, it doesn’t really offer much more than those mobile games, so why the big price tag?

All in all this game is very fun and very simple. You won’t lose hours of your life playing it for extended periods of time because beyond expanding your guild building and killing monsters/being killed by monsters, there isn’t a great deal to do. It is however great for killing the odd half hour here and there. There are times when you want something big and flashy and times when you just want something silly and fun. This is the second one and as far as silly and fun games go, this is a good ‘un.

7/10 – A great game to quietly enjoy but not a blockbuster.