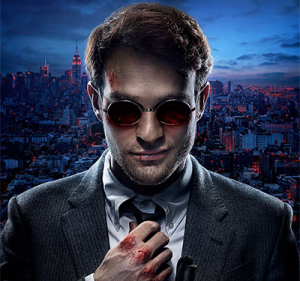 First some background: I am not a daredevil fan. I know very little about the character and his storyline. In addition, due to my TV situation I have not watched any TV shows of this genre (The Flash, Arrow, Gotham or Agents of S.H.I.E.L.D). I have done my best to keep up with the Marvel Cinematic Universe (MCU) but have missed a couple of bits and watched things in the wrong order in some cases (which bugs me a lot).

My intention was to watch the first episode of the series and then write a review of it. However, having created a first draft of the review I then sat down and watched the second, third and fourth episodes (each time rewriting the review ever so slightly). It has helped give my review a bit more depth and also serves as a testament to how watchable the show is.

The show is set after the events of the first Avengers movie. As Hell’s Kitchen looks to rebuild after the devastation, crime and corruption are rife and Matt Murdock (AKA Daredevil) has had enough and sets about cleaning up the city. Episodes are sixty minutes long and are currently only available on Netflix.

One of my favourite things about the show is that it avoids being too much of a superhero programme. It portrays Matt as much more of a human than other film based Marvel characters. This is shown when a bad guy comments “if he had an iron suit or a magic hammer I would understand why he’s causing us so much of a problem”. We see Matt get beaten up, fail, doubt himself and even the bad guys appear more well-rounded and fleshed out than most other comic book villains.

Despite my lack of knowledge on the character and his storyline, I don’t feel that my enjoyment of the show was affected by my inexperience. I imagine it would be very easy for programmes such as these to become so self-referential that newcomers are at a bit of a disadvantage. No doubt there were lots of cool Easter eggs and in jokes for people that know Daredevil better than me, but for the most part I never felt like I was missing something.

I do think that people will struggle to understand a lot of what is going on unless you watch each and every episode. However, Daredevil is only available on Netflix, the perfect medium for ensuring that viewers don’t miss a thing and can watch the show at their leisure.

The action is good, if slightly gory at times (I’d think twice about allowing anyone under 12 to watch it) and the show manages to avoid being too focussed on the martial arts that Daredevil (and apparently every one of his enemies) is an expert in. There are a few fight scenes that go on a little too long but on the whole it is a nice mix of cerebral crime fighting, mystery unravelling and martial arts awesomeness.

One thing that did bug me a little was that I don’t feel they gave enough background to Matt and his abilities. I’d like to know more about why he can fight like he can, how he honed his skills at reading the truth in people’s voices and being aware of his surroundings just by listening. Each episode they reveal a little more, but four episodes in and I still don’t feel that I know enough.

Daredevil is good. Not Earth shattering, not the best thing I’ve ever seen, but good. Marvel have done really well in differentiating it from their film franchises and making it offer something completely different. It is exciting, well-acted, well written and above all, entertaining. Even if you’re not into superhero films/shows or comic books, I’d recommend giving it a go. For the most part it feels more like a crime drama/gritty vigilante justice piece than a Marvel superhero show.