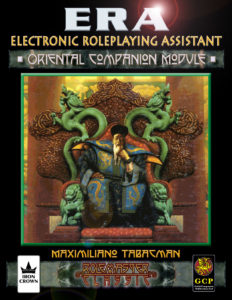 Leave the west behind and enter the world of the Shogun, where Ninjas are assisted by shapeshifting Hengeyokai, Samurai battle for honor against evil Wu Jen, and the Shinto Priests study the Way of the Kami.

Oriental characters benefit from 4 new whole sets of background options. The Way of the Warrior includes powers such as Nerves of Steel and the Family Outlawed flaw. With the Way of the Ninja you can create a Poisoner or a Master of Facades. The Way of the Mystic could give your character a Magical Rage, but also a Patron Demon. Those born under the Way of the Gods could find themselves with an Enlightened Sight, or charged with a Sacred Oath.

When adventuring in the Orient, the party could stumble upon a malevolent Oni, dream about a Baku, or find themselves bowing in respect to a Kappa. Of course, the Oriental Dragons are also included. 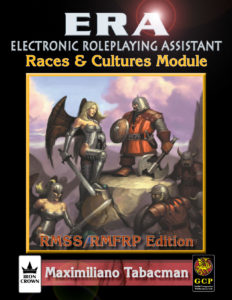 The RMFRP Races and Cultures package for ERA offers 58 different races and has 11 varied cultures.

Apart from the well know types of humans, elves and orcs, this package brings to the world animal fusions like the lion centaur and the shark shaped shuikmar, alien looking urlocs and grotesque quishadi.

For Shadow World players, you will also find an assortment of races: specific human types, the sub-races of iylar elves and many half-breeds, flying hirazi and savage garks.

Once the race is chosen, proceed to specify the actual culture in which the character was raised. A harsh life with the arctic people, or a quiet farming adolescence in a rural environment? Has your character learned to move around the tunnels of the mining culture, or the sunny beaches of the littoral tribes?