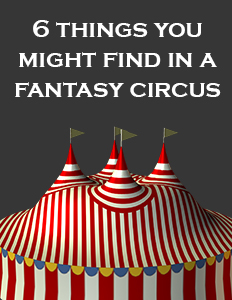 When used well, circuses are great devices in fantasy RPGs. They can introduce new characters, new adventures and new peril to an otherwise quite locale. A lot of the acts that you find in real world circuses would probably translate very well into a fantasy setting. No doubt there would still be clowns, contortionists, acrobats and people shooting apples off a volunteer’s head. However, there are certain acts that you might only find in a fantasy setting which could help to make things even more exciting and lead your characters on their next adventure.

Below are just six of the (no doubt many) different things you may find at a circus in your fantasy RPG.

In the bad old days, no circus was complete without a trained lion, sea lions that could do tricks or elephants being made to march around and obey commands. While the practice has (thankfully) pretty much died out in modern times, it could be interesting to include them in an RPG with fantasy creatures. Imagine trained baby dragons flying around the big top in a beautiful synchronised ballet, a giant being used to add more height and terror to a trapeze act or a skeleton juggling its own bones.

The inclusion of trained animals could also lend itself to some interesting story elements. How do the PCs feel about the animals and their potential mistreatment? Are there groups of the population that want to free the creatures and end the circus? What happens when the creatures escape or lash out at their owners?

Exactly what constitutes a freak show will depend largely on your setting. What are the most uncommon characteristics, races or creatures? Would people pay to see them? As well as uncharacteristically tall dwarves, a race of being from across the sea and the ever-present bearded lady, your freak show could include freaks created by magic. A magic user of dubious morals could supply monsters created by grafting two other creatures together, the mind of a sentient being trapped in an animal or an animal that can speak to humans.

Again, the moral ambiguity of a freak show could lead to some very interesting story ideas. Are the ‘freaks’ there willingly? Are their friends or family out to free them and bring them home?

Reaching across the void

One of the reasons circuses continue to be popular today is that they are a great place to marvel at spectacles, see things you never thought were possible and maybe be a little bit scared, all safe in the knowledge that actually, nothing can go wrong. In a fantasy setting, surely circus goers would pay good money to see a trained practitioner summon an all-powerful demon right in front of them.

The vast majority of the population won’t know precisely what a demon is or looks like or what constitutes a particularly scary and impressive demon. For this reason the practitioner could summon a relatively small and easy to manage demon with much the same affect. Alternatively, the whole thing could just be an illusion. Either way, it is sure to bring in the punters.

In a similar vein, why would simple country folk who rarely have any interactions with magic not be completely awed and amazed by spell casters and their capabilities? With that in mind, what about pitched battles between two gargantuan elementals? Conjured by magic users and contained within a strong shield, the every day person would get to see the might and majesty of an elemental close up and enjoy the spectacle of watching two of these monsters face off against each other.

To this day mind reading and hypnotism remain popular spectacles. While the use of magic might take some of the… magic out of the act, I still think there is the potential for some amazing shows. What if the mind control act wasn’t just hypnotising people to think they’re chickens but was making them undertake breath-taking, near death feats without them ever knowing they were in danger. Of course there is still a lot of fun to be had with people thinking they’re chickens or chatting up a dog thinking it to be an attractive woman as well.

Mind reading is a little less impressive in a world where there is a spell that does just that. But again, in a town (or world) where magic is relatively rare, think how amazed the local population would be to see someone read someone else’s mind. This could be open to misuse by the magic user if they also use this time to find out where they keep their valuables or decide to blackmail them with knowledge of their deepest, darkest secrets.

Trapeze acts and acrobatics are a mainstay of a circus and would amuse and delight crowds, even in a fantasy setting. You may find however that magic makes these acrobatic skills even more amazing and death defying. What if, rather than the trapeze, people were swinging through the air propelled by magic alone, what if the magic was being cast from below by magic users on unicycles? It would take a lot of concentration, a lot of PP and a lot of trust.

Acrobatics by magic would also be a great starter for an adventure or an investigation. One of the acrobats has died, the magic caster who was supposed to be keeping them up in the air had fallen off his unicycle and lost concentration for a split second. Tragic accident or premeditated murder?


A lot of these acts might incur the wrath of local clerics or witch hunters. Some might be morally repugnant to some people. Others might want to run away with the circus and be a constant part of the wonder and excitement.

There are lots of different things that you could include in a circus and a lot of different directions it could take your characters in. What do you think you might find in a circus in a fantasy setting? Give us your thoughts on the Iron Crown Enterprises blog.