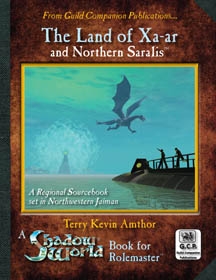 While Terry K. Amthor wrestles with timelines and adventures for the new Emer III/Eidolon, remember there is plenty of adventure in Jaiman!

Shadow World: The land of Xa-ar and Northern Saralis is set in NW Jaiman and has a ton of adventures and an exotic campaign that could keep your players busy for ages.

Jerrin is King in Haalkitaine, and while he claims to be Emperor of all Jaiman, he is far away to the east and the Phoenix Crown holds no real power here. Xa-ar and Saralis are fractured lands, trying to recover from the last occupation by the Lord of Ulor.

But powers —both new and very ancient rising again— threaten the fragile peace. Perhaps the greatest threat is an artifact from before recorded time, asleep but ready to be awakened…

Shadow World: The land of Xa-ar