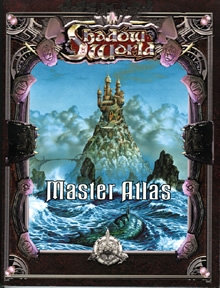 Hot on the heels of Quellbourne becoming a copper pick on RPGNow, another Shadow World product has received the online RPG stockist’s acclaim and this time it is a SILVER pick product. Ladies and gentlemen, we are incredible pleased to announce that Shadow World Master Atlas 4th edition has now become a silver pick product on RPGNow.

You can get Shadow World Master Atlas 4th edition as a pdf for just $20 at RPGNow.

…A planet hangs on the threshold between Order and Chaos, a focus of strange powers and portals to alien dimensions. Sorcery clashes with ancient technology while capricious deities make war and the Dragonlords walk as men. Against them all rises the Unlife, a force whose dark servants seek the destruction of all that lives…

Return to the Shadow World, home of Dragonlords and Loremasters, mysterious ancient civilizations and Navigators who ride the magical Flows of Essænce.

Some Highlights of the Fourth Edition:

A huge thanks to everyone who has bought and supported Shadow World products through the years and helped to make the Shadow World Master Atlas 4th edition a silver pick product on RPGNow.