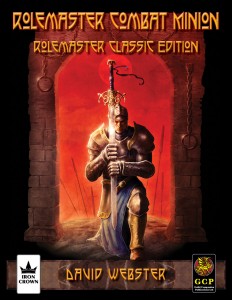 Under 6% of products on RPGNow receive this accolade and we’re really proud to have another product achieve this level of success. A huge thanks to everyone who has purchased and supported the Rolemaster Combat Minion and all Iron Crown Enterprises products.

If you haven’t had a chance to check out the Combat Minion, you can try the app for free at www.web.com.au/rolemaster/minion. The free web app includes six combat tables: Broadsword, Short Bow, Shock Bolt attack tables, and the Slash, Puncture, Electricity critical tables

Rolemaster Combat Minion offers a quick and easy way to manage combat encounters. It streamlines the entire combat process, including initiative, combat calculations, attack and critical tables. It can be used on any desktop PC or tablet with a normal web browser.