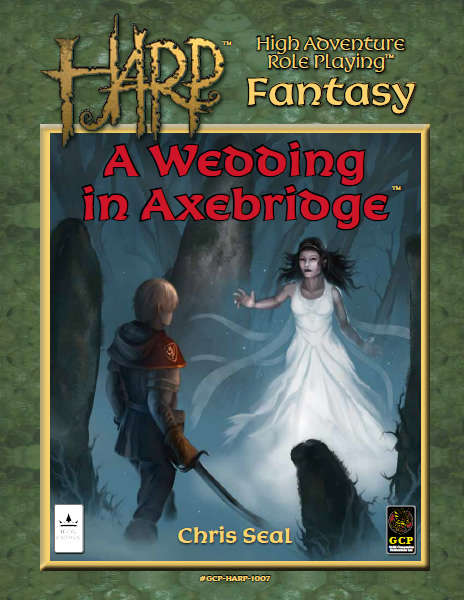 Iron Crown Enterprises are thrilled to announce the release of a BRAND NEW adventure module for High Adventure Role Playing (HARP) Fantasy! Ladies and Gentlemen, please welcome the newest member of the ICE family: A Wedding in Axebridge!

A Wedding in Axebridge is designed as a HARP Fantasy adventure module for 4-6 characters of up to 4th level. This module is set in the Aeden Isles which form part of the southernmost Shatterings of Mithra (aka the world containing Cyradon), but the adventure may be readily relocated to a different fantasy setting.

A wedding is normally a time for celebration and festivities, but in the village of Axebridge the celebration takes on a sinister undertone. Axebridge is a small, close knit village that lies on the south bank of the River Clearwater. The village takes its  name from the ancient stone bridge that spans the river, and the crossed axe insignia that decorates its walls. Across the river, on its north banks, two ruined watchtowers stare out across the vast expanse of the Alfwood.

The lands around Axebridge are renowned for strange  happenings. Unbeknown to the inhabitants, these occurrences happen because Axebridge is situated close to a place of great magical power, which was once the site of a great druidic temple. In more recent times, fey creatures have been drawn to the nexus. With the inevitable contact between fey and mortal, old wounds have been  reopened. When a jealous admirer is thrown into the mix, the village of Axebridge finds itself under threat, and hope for the village’s future lies in the hands of a few bold souls marked by fate.


A Wedding in Axebridge is available now at RPGNow for just $5. Buy it now >>