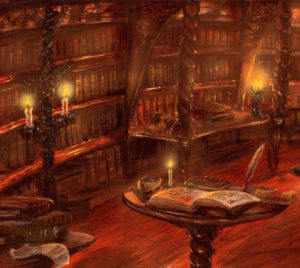 There are a number of reasons that magical businesses may not be present in your roleplaying game. Perhaps magic is particularly rare or difficult to manage, perhaps magic is regarded with distrust by the majority of the population or perhaps the mages guilds restrict magical businesses to protect their own interests and ensure that the guilds remain the only place to go for magical help and advice. Even if all of these are true, there is always space for a black market ‘dealer’ in your campaign world.

So whether your businesses are ‘off the radar’ and demanding coin from a population who have nowhere else to go or established, respected businesses in large population centres, here are some ideas for magical businesses that you don’t often find in role playing games:

Long door travel agents
In a world where coach and horse is one of the fastest forms of transportation, the rich and powerful would no doubt be interested in ways of reaching their destinations quicker and with less risk of being held up by bandits. Businesses that offer (for a small fee of course) to use long door spells to transport people to popular destinations or teleportation spells (for a much larger fee) to transport people to exactly where they want to be would no doubt be a popular choice.

Illusion casting services
Beyond their uses to trick and confuse people, I imagine illusions would be pretty popular amongst the lonely (and perhaps perverse) of the population. A pet that doesn’t require any upkeep, a silent companion with which to while away the hours or an alluring member of the opposite sex to join you on the quiet nights in alone. Whatever it is you’re looking for, illusion casting services will no doubt be able to oblige and be very discrete in doing so.

Protections/security businesses
This one is pretty obvious, but if guards and common thugs are popular in your setting, why wouldn’t magical based security be just as popular. As well as enchanted vaults and mischievous traps, magical security businesses will no doubt make a lot of their money from common people who want to protect the few valuables they have or less desirable individuals who would like to avoid being taken by surprised or spied upon by their enemies.

Animal wranglers / Pest control
If Medieval times were anything to go by, fantasy settings would be rife with pests and unwanted animals. Rats, mice, insects, wolves, bears and dragons would all cause major problems. In a fantasy setting however, people wouldn’t just have to live with it. There are plenty of ways that magic could help cope with the problem. Whether using illusions to scare off animals, mind control to convince the animals to move on or familiars to chase off unwanted pests, there would be plenty of demand for magical pest control from all sorts of different people.

Spying/PI
With some magic users being able to eaves drop using magic, make themselves invisible or get into rooms that others simply can’t get into, commercial spies or private investigators would be in high demand in most fantasy settings. From guilds looking to steal secrets from competitors to poor farmers wanting to check on the fidelity of their spouses, there would always be demand for someone in this type of work. The flip side of this of course would be that gangs of stealthy magic users may begin spying on rich individuals and using what they find to extort money from them. Why spend hours spying on a farmer’s wife for a pittance when you can blackmail a rich noble for ten times as much in half the time?

Lie detectors
Perhaps there is a reason that lie detection spells wouldn’t be used to identify guilty parties in terms of crime (though I can’t think of one), but there will always be a demand for this kind of magic from the general public. I suspect it would mostly be jealous husbands and wives or business owners trying to weed out thieves. The cost of using the service would be relatively low, however, magic users in this kind of business could make money on the side by suggesting that the person is telling the truth and extort “a small fee” from them later as a “thank you” for not ratting them out.

Weather reporters
With farming and shipping relying so much on the weather, it is odd that weather reporters aren’t more prevalent in fantasy settings. Surely a magic user that focussed entirely on foreseeing changes in weather or being able to manipulate the weather when necessary would be worth their weight in gold aboard a trading ship? Because of this I imagine they would be freelance individuals touting their abilities at docks rather than shop-owning businesses.

There are plenty of other ideas for magical businesses; repair shops, demolition crews, fortune tellers, dream/sleep merchants and light sellers for instance. If you have ideas on other magical businesses, thoughts on the ones I’ve proposed or want to discuss how magic works in your RPG or campaign setting, feel free to do so on the ICE forum using this thread.