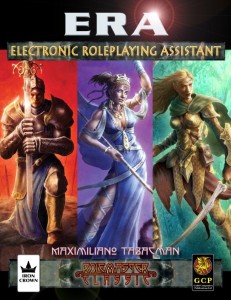 All three modules of ERA for Rolemaster Classic are now copper pick products on RPGNow!

We’re thrilled to see that so many people have bought and enjoyed Arms Law, Spell Law and Character Law and would like to thank everyone who has bought and supported the entire ERA product line.

For those of you that haven’t yet had a chance to try ERA, you can test it for free by downloading the ERA for Rolemaster application from RPGNow. The application comes with sample races, professions, spells, attacks and criticals which can then be expanded by buying complete data sets for both Rolemaster Classic (RMC) and Rolemaster Fantasy Role Playing (RMFRP).


About ERA for Rolemaster Classic