As I have almost certainly mentioned before, while I love physical books, I find ebooks incredibly useful whether it is novels on my Kindle for entertainment or textbooks on the tablet for work purposes. Carrying 1000+ page textbooks in my backpack from Cambridge to Ipswich and vice versa is not good for the book, my backpack or my back. Sadly not all author/publisher combinations provide ebook versions (a hint to Ian Sommerville) and some have ludicrous pricing that is not helpful (5% less than the hardcover which is already £130+, stern look at Roger Pressman and publisher here) to my budget or indeed my ability to persuade my students that certain (e)books should be on their (digital) shelves. However, some ebooks suddenly get better. Over a year ago, I purchased the ebook version of Cormen et al 3rd edition, which when I purchased it was a very barebones Kindle edition. A few months ago, my tablet complained about needing to resynch files in its Kindle app. Concerned that a file might have become corrupted, I let it resynch and the problem went away. A little time later, I discovered that my copy of Cormen et al had acquired a fully functioning set of bookmarks making it so much easier to navigate. Which leads me to …

We released Tales from the Green Gryphon Inn, the newest adventure module for Shadow World by Terry Amthor. (Actually with fairly minimal effort, you could hide the Shadow World elements and use it in other established fantasy settings). Our loyal fans did a post-release proofreading run and caught various typos and other errata. (I don’t think I catch as many typos on the tablet edit runs as I do on laptop.) These were reviewed and fixed – so if you redownload Tales from the Green Gryphon Inn, you will get a better ebook too.

Terry has completed the print masters for Tales from the Green Gryphon Inn and I have uploaded them into the OneBookShelf / Lightning Source process. I hope that the printed softcover will be available sometime in May, subject to satisfactory proofs.

Terry completed his full draft of the enhanced Eidolon sourcebook and I have already completed an editing pass on this. External proofreaders are already triple-checking it while some additional RMSS stats are written. We hope to release in pdf sometime this month. 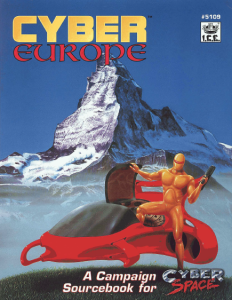 One of the other benefits of ebooks is that you can acquire copies of books that are extremely difficult and/or expensive to obtain in print, especially in the domain of RPGs where print runs were once finite. I am delighted to welcome back “CyberEurope”, a Cyberspace sourcebook written by Anders Blixt, to our collection of vintage pdf products. CyberEurope is available as a scanned but searchable pdf, and completes the Cyberspace set. It is available now at RPGNow.

Many of you have already found Maximiliano Tabacman’s ERA software very helpful in supporting your RM Classic gaming. We are delighted to announce that Max has been able to build the datasets for RMSS/FRP and we are releasing these as three dataset products – RMSS/FRP Character Law (combining the character generation of RMFRP core rulebook, on 4th May), RMSS/FRP Spell Law (all three spell law volumes, on 5th May), and RMSS/FRP Arms Law (1999 version, on 6th May).

RMU Treasure Law is as yet incomplete – Dan is still completing the magical portions. Once it arrives as a full draft, I will raise its editing pass to the top of the queue.

Terry and Craig are continuing to explore why InDesign is so cantankerous with the RMU files.

In addition to ebooks being updated and improved versions made available, we also have updated all of the AutoHARP products. The major enhancement here is that it should now be significantly easier to install the base HARP Fantasy and HARP SF databases simultaneously with the AutoHARP engine.

In HARP Bestiary, John Duffield and I had an extended discussion on Dragons and how to represent dragonfire. We concluded with a set of extended Blood Magic talents to handle creatures who need to use magical abilities more frequently than a certain number of times per day, so such monsters might be able to use their capabilities a certain number of times per hour. However, those rules didn’t really work well for dragonfire – in that, yes, dragons had a finite amount of dragonfire per day but it was more than three bursts and they needed the flexibility to be able to burn through them rapidly. So we created a set of talents that captured the special needs of dragonfire.

I have completed my editing pass on the third draft of HARP Folkways. Jon had provided a strong selection of ten new professional concepts, and these have now been tweaked by me to expand the selection of professional abilities (and indeed in nearly all cases a choice of abilities) and to ensure that all of these professions are within the standard power range. All of the new professions are non-spellusing professions; on the one hand, these provide a means of representing the normal folk of a fantasy world with higher level members representing experts of some kind, on the other hand, they have the full complement of starting skill ranks, favored categories, etc., so they would work very well as starting professions for some character backgrounds (your character could spend 1st-level as an Artisan, a Farmer or a Valet), and on the gripping hand, some players might find some of these new professions suit them for many levels to come (Sailors, Hunters, Scoundrels, among others spring to mind).

The remaining work that Jon and I have to sort through is the racial abilities for the new races that have been included in HARP Folkways, and make sure we have a best and varied fit of abilities. Jon’s final set of races are highly unusual and will add a touch of the exotic to any fantasy setting.

I have races to tweak and Undead to write (and assignments/exams to mark as well unfortunately.) The next scheduled Briefing will be in June 2015.