To the sixty-first Briefing and the sixth scheduled Briefing of 2016. The days of May melted into a blur of marking and there are still some more assignments requiring grading, but I can sense the first scents of summer freedom. 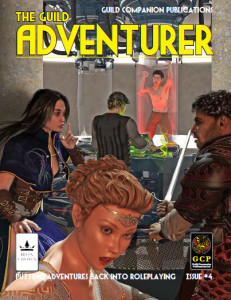 The Guild Adventurer #4 is now available!

The fourth issue has the following fantastic scenarios:

The Guild Adventurer is now available on OneBookShelf.

Jonathan Dale has posted a number of the revised tables and rulings for RMU Arms & Character Law on the Beta board on the ICE forums, and has been doing a sterling job of explaining changes and responding to queries. He has now completed his pass of changes to the main document, so while Jonathan carries on updating the combat tables, Graham can make use of the completed portions to press ahead with his work on Spell Law.

On the forums, the question has been asked as to if and when there will be a fifth Guild Adventurer? We are definitely committed to publishing adventures and adventure modules (see below). However, we are likely to be trading as Iron Crown Enterprises in the not-too-distant future so TGA#5 might have a new title. Perhaps the Crown Adventurer?

Andrew and Heleen Durston are now formally contracted to write The Trail of the Corrupt, inspired by Colin’s first set of adventure seeds. A full draft is expected in August.

Colin’s second set of adventure seeds inspired Brad White to submit a proposal for a trilogy of adventure modules. Brad and I have agreed that his module sequence will be written for RMU and HARP, and we are in the process of agreeing a schedule for him to deliver the various module drafts and preparing contracts.

The Shadow World team-written adventure module is quietly coming together.

Terry has been probing his project portfolio and the Eye of Amthor seems at the moment to be resting on Emer I. Progressing Priest-King of Shade to the next stage is also on our intersected todo lists.

Firstly, on the HARP sourcebook wishlist, I have had some discussions with a prospective author regarding HARP Strongholds. Hopefully this will translate into a full proposal soon.

Secondly I received the very long art list for HARP Folkways from Terry. I am in discussions with various artists to generate the initial art allocations and get them formally commissioned.

Thirdly, I have completed all the text portions of the Demons chapter for HARP Bestiary. That leaves only the stat blocks for the Demons still to be done for that chapter. Looking at Bestiary as a whole, the introduction needs to be collectively written by the team, Colin has a consistency pass on the “Normal Animals” chapter and some work still to complete on “Water Monsters”, John has consistency passes on the “Land Monsters”, “Air Monsters” and “Dragons” chapters and some work on “Lycanthropes” to complere, while I have outstanding stat block work and consistency passes on the “Undead”, “Elemental”, and “Demons” chapter to conclude. Then the whole manuscript will require an editing pass and more creature artwork than you can shake a ten-foot pole at. Nevertheless I am feeling very happy about where Bestiary has reached.

Back to exorcising the residual marking demons. The next scheduled Briefing will be in July.