To the sixty-third Briefing and the eighth scheduled Briefing of 2016. I continue to be militant about my summer activities and (up to the time of writing at least), it has been working. This Briefing is early as I will be away on actual holiday over the turn of the month.

Sequences whether they be trilogies, quartets, etc., are commonplace in fantasy literature. For a book reader, there’s the dilemma of do you read each book as they come out or do you wait until the trilogy or whatever is completed? Advantages and disadvantages either way. And of course for a book collector, there’s the issue of when to buy the books. If you hold off buying until the trilogy is complete, perhaps the publisher will drop the series for want of sales. If you buy as they come out, you can be infuriated by publishers who change the trade dress midseries just to spoil the look of the set on your physical bookshelf.

I have a number of complete fantasy series on my book shelves that I have been saving for “rainy days”. The last series I spoke of in these Briefings was the Winter of the World six-novel sequence (first three are a trilogy, fourth and fifth are linked, sixth is standalone) by Michael Scott Rohan. These are sword-and-sorcery in the lost kingdoms of the last Ice Age. Smithcraft as magic, mask magic, prehistoric and megafauna monsters, the inhuman Powers of the Ice who seek to purge the earth of the corruption of life, innovative twists on dwarves and fey, and more. Highly recommended.

Having finished the Winter of the World, I then cast around the shelves for the next series. As I have been heavily involved in HARP Bestiary, and the next two rpg sourcebooks that I will be working on will also be fantasy, I needed another fantasy series to maintain my inspiration. I picked Juliet McKenna’s Tales of Einarinn quintet which I had purchased some years ago as paperbacks and decided to rebuy as ebooks for convenience of reading on the train etc.

I was well rewarded with a refreshing epic fantasy, with a setting divergent from standard medievalism – the author’s classical education brings us a rump of empire ruled by patrician families, independent kingdoms, powerful mageborn with elemental affinities and magics yet distrusted by noble and commoner alike, Mountain and Forest Folk who are not dwarves and not elves but humans with their own traditions, Rationalist scholars decrying the superstition of the old religions and magic alike, and a really great story with wizards, thieves, soldiers and nobles being pitted against a merciless foe wielding a long-lost mind magic (known as Artifice, which some considered evil). I enjoyed it so much that I have purchased the followup series as ebooks and have already finished the Aldabreshin Compass quartet where the action moves to the Archipelago (think Indonesia in climate). The native Aldabreshi govern their lives by omens from the heavenly compass (astrology) and the earthly compass, whilst reviling all magic as a disturbance of the natural order and its practice punishable by death. Again, highly recommended.

There is relevance, by the way, to what I am working on in terms of rpg sourcebooks, but I will get to that.

Behind the scenes, Jonathan Dale and Matt Hanson have completed the attack and critical tables changes for Arms and Character Law. Getting the core to stability is a very welcome milestone, and for Matt, who has been working on development from the beginning, a herculean and epic effort.

I will be in touch with our various software creation experts so that they can evaluate the effort needed to create RMU versions of their software. RMU development focus shifts to Treasure Law and Creature Law.

ERA for Rolemaster and Shadow World 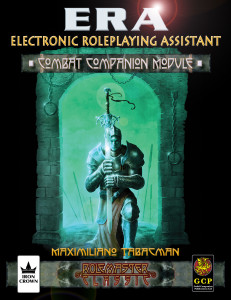 Speaking of software, we have released updated versions of the base ERA software and all the dataset packages. If you have registered with OneBookShelf to receive update emails, you will already know this. If not, we updated all the files on 10th July so feel free to download whenever convenient for you.

In terms of Shadow World, the updates to the dataset include the addition of the critical tables from the Master Atlas. 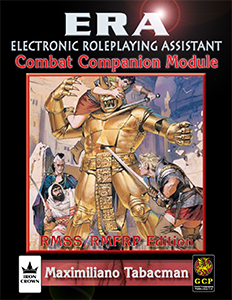 I indicated last month that I had started on the change list for HARP Loot (originally published as HARP Loot: a Field Guide.) I have completed the change list, checked that Jon Cassie is happy with my changes to his book and received his new introduction, and have already sent the revised version complete with new art to Terry for generating the layout of the enhanced version. The change list was essentially making the rules set consistent with HARP College of Magics so I only needed several days of uninterrupted working at home to get everything straightened out. Job done, project off my todo list.

The next set of quiet days at home will be dedicated to progressing my stats work on HARP Bestiary as it is inefficient to do it on the train. The Undead stat blocks are already underway.

So what to do on the train commutes of my sporadic trips to the office? Time to consider the next HARP sourcebook on my todo list, which is the return of Something Wicked.

Those of you who keep track will recall that once upon a time I was working on a HARP sourcebook entitled Something Wicked, focusing on evil, evil magic, and its fell practitioners. By “working on”, I actually mean that I wrote the complete draft and had it independently edited. Shortly afterwards my company acquired the HARP licence, we reworked the core rules and other existing supplements to create the enhanced versions of HARP Fantasy, HARP Martial Law, and HARP College of Magics, but then needed a new bestiary book. As my editor for Something Wicked pointed out to his amusement, the Wicked draft had almost as many monsters as the old Monsters: a Field Guide product, so we stole the Undead, Elementals and Demons chapters from Wicked and, as you know, I have been persisting in bringing those chapters into revised format for HARP Bestiary.

So high time to take stock of Something Wicked and see what needs to be done to bring it back to a complete draft again. These are my thoughts and I will welcome discussion on the forums on these.

The first question is should we change the name? There will still be lots of material on evil and evil magic and its practitioners, but there is other material that I think should be included that might not be considered normally as “evil”. Give us your thoughts on the title in the ICE forum.

The original chapter 4 (1 to 3 were Undead, Elementals and Demons) was all about professions. This introduced the Demonologist (variant Mage), the Warlock/Witch, and the Wildmage (a “semi” in Rolemaster-speak with randomly rolled spells in its Sphere). It also gave revised versions of Cleric, Magician, Necromancer, Adventurer, Druid, and Shadowblade. You can find these revised versions for the first three in HARP Fantasy and HARP College of Magics. The Druid (and possibly Beastmaster) should appear in a future HARP divine magic or wilderness sourcebook; the Shadowblade (which should be properly named Nightblade in proper homage to the Rolemaster Companion classic) could feature in Something Wicked but I would be happy to defer it to HARP Subterfuge. (Again, please discuss on forums and proposals still welcomed for HARP Subterfuge) Wearing my line editor hat, I would need to be convinced that Adventurer is a proper independent concept. The original College of Magics manuscript had the Mystic profession as a variant mage profession (which was borrowed from me for Codex). Noting that mind control magics can be considered evil (see the in-setting views of some characters on Artifice in Juliet McKenna’s setting), it is not a huge stretch to include it in the new Wicked book. I am, however, minded to rename the Mystic to Mentalist or Seer – as the Circle of spells originally written by me is equivalent to Mentalist and Seer in Rolemaster terms – and so save the term Mystic to cover something that is not a variant magician profession.

The original chapter 5 was all new spells for Low, Middle and High Magic. Obviously all these spells need to be made consistent with the enhanced HARP College of Magics and the Spheres/Circles of all the new spellcaster professions have to be included. There’s an opportunity here to rescue some spells from Codex or even Grimoire (if its author Chris is happy with me reworking his material). Given what I know of the probable sourcebooks in the next couple of years for HARP, the new “Wicked” is the sensible place for miscellaneous additional spells. Again, thoughts on forums, please, on your spell wishlist.

The final three existing chapters need to be brought into line with the enhanced rules across the HARP line. (These include epic magic rules, a new type of magic known as Sorcery, and GM advice).

The inclusion of mental magic and “Seer” magic requires support material. As the primary coauthor of Mentalism Companion, I have written entire chapters on scrying and divination and more. I will be drawing upon some of this work and adapting it to HARP mechanics and the HARP game style in terms of high adventure and its granularity level of detail. Again, comments on forums, please.

I look forward to reading the discussions on the forums.

I return to working to dual working on HARP Bestiary stat blocks and the new Something Wicked manuscript plus additional editing work. The next scheduled Briefing will be in September.