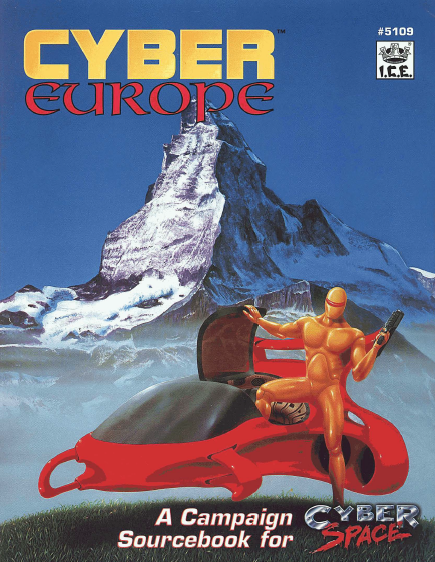 Iron Crown Enterprises are thrilled to announce the re-release of ‘Cyber Europe’, a campaign sourcebook for Cyberspace. After years lost in the IP ether, this brilliant sourcebook by Anders Blixt is now available again as a scanned pdf.

The year is 2090 and the place is the Federal State of Europe. Thirty-six countries from Iceland to Georgia have been blended into a caustic, volatile melting pot. Governed by aristocrats, who are in turn ruled by executive slime, the European Community exists at the edge of depravity and despotism. Dare you cross its war-torn borders?

In Cyber Europe, you can unlock the secrets of the Vatican’s anti-terrorist force, get thrown into a Kriminalbezirk, join Sondergruppe 9, fight the deadly Kampfmaschine, and run into blood-thirsty members of the Neuhitlerjugend.

Cyber Europe culminates with an intriguing adventure which sets players on a quest to recover the holy Christian artifact, the Spear of Destiny.

This sourcebook provides you with the following:

For more information on Cyber Europe or to buy your copy, visit RPGNow or follow the link below.