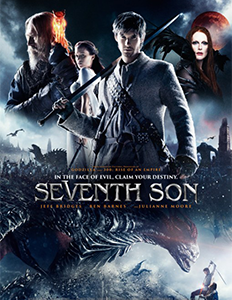 What follows is a review of the film “The Seventh Son” starring Ben Barnes, Julianne Moore and Jeff Bridges. It will contain spoilers. You have been warned.

I really enjoyed the fantasy movie “The Seventh Son” and it provides a lot of ideas for gaming throughout. This is based on the book “The Spook’s Apprentice” by Joseph Delaney written in 1987 – see wiki here.

Now, at first I was a bit put off by Jeff Bridge’s “Master” character having an odd accent. He was really “hamming” it up. But after a while, his quirky, quick witted sarcastic character really came through. The opening battle with an apprentice was quite well done – shocking even in that it was not one of these computer game, superhero battles where the characters take massive hits to only bounce back up unimpeded in their fighting ability by recent killing blows. And his first apprentice dies in the opening scene! So characters can ACTUALLY DIE in this movie! Comparing this to the recent Hobbit films this action is a “cut above” (pun intended) and suspends disbelief far better than the fighting slop dished out in other fantasy movies.

I was annoyed by them being called “spooks” (and yes, I know that is in the book). Too much a word we use in spycraft. It was disconcerting. But this is a minor complaint.
What I did notice throughout was the excellent set work. The armor looked very real on the Knights and guards. The backdrop looked very medieval, a good mix of new and colourful fabrics set against the backdrop of filth, straw, stone castles and wooden hovels.

The evil queen and her transformation from dragon was really well done. In the first battle how the silver net captures her, her ability to entrance and possess, the use of magical components etc. lent weight to the setting, making easier to immerse oneself if the uniqueness and believability. The evil headquarters, looking like an ancient byzantine palace was superbly done. The walled city, the views from afar, or right down on the streets was all very believable and great setting work. It really made the movie “feel” like you were in an other-worldly (not just our world’s) medieval setting. Even looking carefully at the nights armour and weapons showed great attention to detail. The battles were exciting and generally believable – the battle with the great bear in close quarters, that was great! And there were many examples of interesting battles and awesome CGI, from the lizard beast attacking the city to the four-armed swordsman.

There is a lot going on here that can give GMs some good ideas. I read the first book of this series 15 years ago and liked it, though not enough to carry on with the series. All-in-all worth seeing.