Welcome to a brand new series on the ICE blog; “What I thought of…”

I didn’t want to limit myself to reviewing other games or books or films and so instead thought I would just wildly impose my opinion on you, regardless of the topic. I encourage you to give your own thoughts on the topic either by commenting on this blog post or discussing it in the ICE forum.

So, without further ado, here is what I thought of… Gloom. 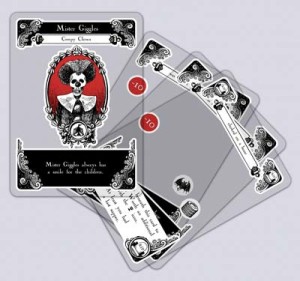 Gloom is a card game by Atlas Games where you take control of a bizarre family of characters with the aim of making their lives as miserable as possible before eventually putting them out of their misery. The core deck comes with four families and a large number of event, modifier and death cards. On Amazon you can pick up the game for $22.06.

There are a number of additional packs that you can purchase including: Cthulhu Gloom, Gloom: Unhappy Homes, Gloom: Unquiet Dead and Gloom: Unwelcome Guests. This review covers the core game and the Unhappy Homes expansion.

The game is played in turns, playing cards on family members to make them more miserable or (in the case of your opponents) happier before eventually killing them off with a death card. The winner is the player at the end of the game that has the most miserable dead characters (alive characters do not count towards your score).

Before we go any further, I need to confess something: I’m a huge fan of Will Wheaton’s Tabletop show on YouTube. If you haven’t seen it, I highly recommend it (maybe I should review that next). I bought Gloom after seeing it on Tabletop.

The brilliance of the game isn’t in its wonderful smelling translucent cards (I can’t be the only one that smells new cards), but in the hilarious ‘events’ that each card describes. You could play the game simply by placing cards on characters until its eventual conclusion, but this would be somewhat missing the point. The fun of the game is in telling the story. It’s in quickly coming up with a backstory to why a character was “menaced by midgets” or “scarred by scandals”.

I’ve played this game a lot now. I’ve played with literary drama types and with beer swilling barbarian types and I have to say, everyone enjoyed it. Some people struggle with coming up with backstory and if you have too many of those in a game it can become dreadfully slow or dreadfully boring as players just lay down cards without elaborating. To really get the best out of the game you need everyone to commit to it. When that happens, the results are brilliant.

On a number of occasions I have put off winning the game because I am having too much fun hearing the stories of these poor souls and the horrible things that befall them. It is one of the most entertaining games I have played in a while.

I’ve been really simplistic in my explanation of the game play, there are lots of nuanced rules about which cards you can play when and earning extra points for various things. In addition, the expansion pack introduces the idea of the family’s homes and the events that befall them. All these extra rules serve to make the game more strategic but don’t necessarily add anything to the game play. When playing with people who haven’t played before I simplify and house rule a lot of it. The brilliant thing is that it’s easy to do and again, doesn’t affect the playability of the game.

I really like Gloom. I play it on nights in with my friends, family gatherings and I nearly always take it on holiday (It killed a few hours while waiting for a flight once and for that reason I will always love it). It’s simple without being boring and you can choose to add in additional rules and add-ons. Most of all, it is fun. I really recommend this game but try to make sure you play it with people who will get into the spirit of it otherwise you’re missing out.