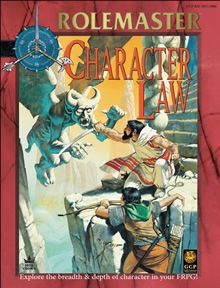 Character Law for Rolemaster Fantasy Role Playing (RMFRP) is now a ‘silver pick’ product on RPGNow. It is a great product that we are really proud of and has really stood the test of time.

A huge thanks to everyone who was involved in the creating of RMFRP Character Law and to all the followers and fans who have helped make it such a success over the years.

For those of you who are unfamiliar with RPGNow’s metal ranking system, of over 46,000 products currently on RPGNow, only 5.32% of them have achieved ‘Silver Pick’ status. It is a huge achievement for a product to receive this accolade but we’re not going to stop there. We want to push as many products as we can to become electrum, gold and platinum pick products.

If you haven’t already got a copy of Rolemaster Fantasy Role Playing – Character Law, you can pick it up for just $15 from RPGNow.

Add the power of expanded character development to your game. Character Law is the utlimate player’s guide for Rolemaster Fantasy Role Playing.

Double your available professions and triple your races and cultures. Enjoy more than twenty new training packages along with new skills and skill categories.

From the ranks of paupers comes the champion of kings! Feel the power!