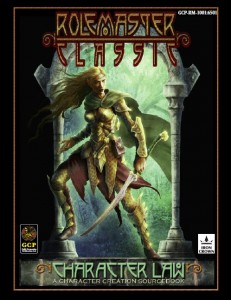 At Iron Crown Enterprises we’re proud of all of our products regardless of how popular they are. When one reaches the heights of electrum pick on RPGNow however, we’re especially proud. We’re thrilled to announce that this month has seen Rolemaster Classic Character Law become an electrum pick!

We would like to offer our sincere thanks to everyone involved in the creation and support of this product and to everyone who has bought it, played it and told their friends about it.

Rolemaster Classic: Character Law marks the return of the original revered Rolemaster system. This volume encompasses the Character Law section of the hallowed “red border edition” Character & Campaign Law and has been completely updated and expanded.

The original Character Law pioneered many of today’s gaming concepts and still sets the platinum standard for fantasy RPG character creation. Within these pages you’ll find the power to create the character of your dreams, from the toughest fighter to the most powerful spell caster. Say goodbye to level, racial, and alignment restrictions. Rolemaster Classic: Character Law lets you do it all.