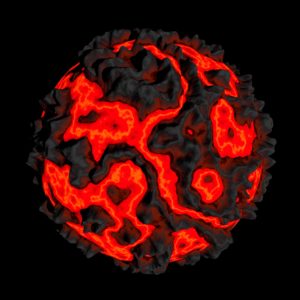 Name: Calignis
Diameter: 11,252km
Gravity: 0.97g
Distance from sun: 0.92 au
Year: 0.88 Earth years (322 Earth days)
Rotation period: 19.7 hours
Atmosphere: Mostly carbon dioxide with some nitrogen and sulphur dioxide
Hydrosphere: There is a layer of water vapor in the planet’s atmosphere. Due to the extremely high temperatures, there is no water on the planet’s surface.
Climate: The temperatures on the planet are extremely high all year round across the entire planet. The planet does experience a summer and a winter, but these only result in the oceans of magma growing larger or shrinking slightly.
Population: None

Calignis’ surface is incredibly hot and is covered in a huge number of active volcanos. There is no water on the surface, instead there are rivers and oceans of magma. The planet is very tectonically active resulting in the large number of volcanos and earthquakes and an ever-changing landscape.

As well as the heat, the oceans of liquid rock and the inhospitable atmosphere, Calignis has an incredibly strong magnetic field. Because of this, anyone travelling close to the planet (or even the system containing it) may experience problems with their technology. A number of vessels and lives have been lost due to Calignis’ magnetic field which has resulted in restrictions being placed around the planet.

Despite the harsh conditions, the planet is not completely devoid of life. Research has shown that several microscopic creatures exist on the surface of the planet. Extensive research on these creatures and how they survive on this planet has not yet been completed.

Calignis is gaining interest from several large corporations who are eager to mine on the planet’s surface for the rare elements that are found there. A few preliminary investigations have been carried out, but no permanent outpost has been established (partly due to the ever-shifting landscape).


To see our previous planet profiles, follow the links below: