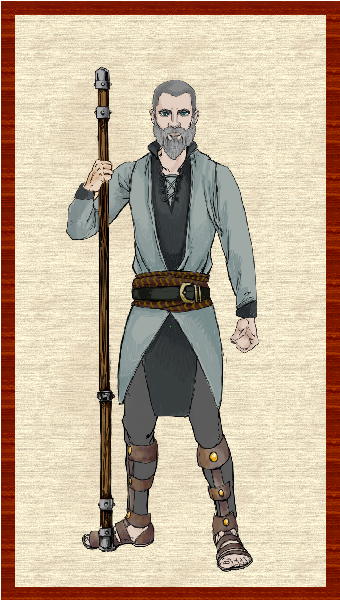 No-one knows his name or where he came from but his incredible speed and mastery of magic and time has earned him the name “Father Time”. He wanders alone through the world and does not want for anything. Using his speed and magical abilities he takes what food and water he needs from anyone he passes but money and belongings means nothing to him. He simply enjoys the world around him.

He has earned many enemies because of his penchant for thievery but none are able to catch him. He believes that his superior knowledge and skill entitles him to anything he can take from the ‘lesser beings’ that surround him and that he is merciful that he doesn’t take more.

He is not angry or aggressive, he simply considers himself better than others. He does not enjoy large cities but believes that even they have a sort of beauty to them. If attacked or cornered, he will use his great understanding and mastery of time to evade his aggressors and perhaps teach them a lesson with his quarterstaff as he goes.

Appearance
He appears to be in his late fifties. Looks however can be deceiving. He has shoulder-length grey hair and a neatly kept grey beard. His eyes are a piercing shade of blue that feels as if they can see deep into your soul. Despite walking with a stick, he is sprightly and graceful in his movements albeit thin and wiry in his frame. He wears nothing but a grey tunic and sandals and carries very little with him.

Adventure Suggestions
An evil tyrant has desecrated a shrine and stolen a great, magical treasure which she is using to enslave the local people. The treasure must be recovered and replaced in the shrine but it is heavily guarded by foul creatures from the abyss. Your adventurers can act as a diversion but you will need someone quick and stealthy to steal it away from under their noses. “Father Time” Seems an ideal candidate but he will need convincing.

“Father Time” has been living in a wood for some time and taking food and drink from a poor local farmer when the need arose. The farmer and his family, believing him to be a demi-god made provision for him and ensured he had everything he needed. Now the family’s youngest daughter has been stolen away by a local crime lord and the famer has asked their god for his help. It is this story “Father Time” recounts when he meets you in the woods and asks you to assist him in saving the daughter.

As the adventurers continue through the woods on their adventure “Father Time” sets upon them and takes some of their provisions and equipment and gives them a smack with his quarterstaff as he goes. As he disappears into the woods the adventurers have a choice: Should they follow this speedy thief or simply continue on their journey.

A small town has had a large portion of its food and provisions stolen by an unknown assailant who lives in the woods. It has gone on too long and they are fed up and looking for some adventurers to set a trap for the thief and hold him accountable for what he has taken.