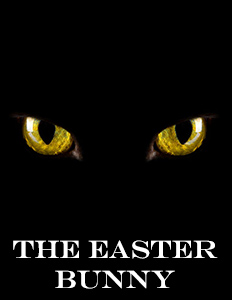 ‘The Easter Bunny’ is a rare and terrifying creature that lurks in the woods and is rarely seen outside of its nest. Storytellers tell of adventurers who have accidentally stumbled upon the creature’s nest and have barely escaped with their lives.

‘The Easter Bunny’ lives in the woods, in clearings far from any tracks and paths. It builds a nest of grasses and small twigs upon which it sits all day and all night. The only reason it will ever leave its nest is to go thieving. ‘The Easter Bunny’ has been known to travel for days to find a victim, searching stealthily across all manner of terrain until it finds one. It is searching for other monsters, other animals. It is searching for eggs.

Once it has found a suitable victim, it will use all its stealth and trickery to steal an unhatched egg and carry it away to its nest. Once there, it will continue to incubate the egg until it hatches and then ensnare the creature using its mental attacks to make it do its bidding.

If you could catch ‘The Easter Bunny’ alone, it would be relatively easy to overcome. Unfortunately, it is never without its retinue. All manner of egg-born creatures call ‘The Easter Bunny’ master, from lizards and birds to dinosaurs and dragons.

Appearance
‘The Easter Bunny’ is one foot tall and although it walks on all fours like other hares and rabbits, it is capable of walking on its hind legs as well. Its fur is thick and dark, blending with the shadows as it searches for its next minion. It has dark, black eyes and large, sharp incisors along with muscular legs built for jumping and kicking. While the creature is more menacing than normal rabbits and hares, it is not terrifying. Many have mistaken it for an extremely large rabbit and approached it before being chased off or killed by its retinue.

Adventure Suggestions
An adventurer believes he has captured the elusive ‘Easter Bunny’ but now, as night falls, he requires help to defend against the creatures that will come looking for it. If the group can slay the creatures that call it master, ‘The Easter Bunny’ can be kept safely imprisoned and cause no more harm. If they can’t… Death comes to all.

A trade path needs to be built through the local woods but builders have come across a clearing which is home to a very strange assembly of creatures. The land owner calls in a group of adventurers to investigate the strange gathering and evict the creatures. By force if necessary.

A learned man of dragon-lore has noticed a small group of juvenile dragons acting strangely in some nearby woods. He requires an escort through the woods to get closer and investigate what might be behind their strange behaviour.