Ladies and Gentlemen I give you the ERA Essence Companion and the ERA Mentalism Companion both for Rolemaster Fantasy Role Playing (RMFRP) and both available now through RPGNow for just $9.95. 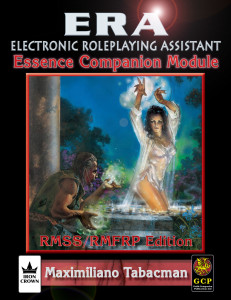 The Essence Companion package for ERA gives you three new professions with all skill costs, level bonuses and spell lists. Also 49 new spell lists are included, with their complete descriptions.

Combat and magic intertwine in the skills and magical abilities of the Warrior Mage. Words of power allow the Runemage to command both matter and minds. Pure Essence is shaped into tools, warriors and barriers by the Mana Molder.

Apart from all the base lists of the new professions, you can now add powerful spells to any character, by learning the new open, closed and training package lists from Essence Companion.

Choke your enemies with Air Mastery, serve a feast fit for a king with Hearth Magic, or change the very structure of an object with Matter Shaping. 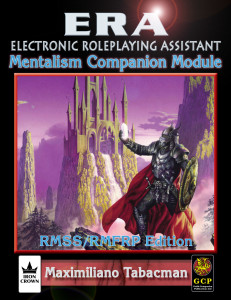 The RMFRP Mentalism Companion package for ERA includes 4 professions, 15 talent descriptions and 38 spell lists with every spell ready to cast.

Seers can project their senses through any barrier and across great distances, and even see into the minds of others. Astrologers can read the past and future by reading the stars, while commanding light and sound to their will. Enchanters affect the senses of others, and also tap into their experiences and skills. ArmsMasters use Mentalism magic to prepare formidable defenses and coordinate group attacks.

Get the most of your talent points by purchasing from new options. Make the most of your sleep time with Dream Walker or Sweet Dreams. Create the ultimate sage with Excellent Linguist and Excellent Memory. Add an extra kick to your mind attacks with Mental Agility and Piercing Eyes.

In addition to the 6 base lists for the 4 new professions, training packages spell lists from the Mentalism Companion are presented. Characters can now change their mental and physical traits using Mind Shifting and Body Shifting. Mentalism doctors are supported by the powers granted by the Physicks list. Dreams are a gateway to a whole new world with spells from Dream Law, Dream Lore and Dream Travel.

Not had a chance to try ERA for yourself yet? You can try it for free by downloading the app from RPGNow.