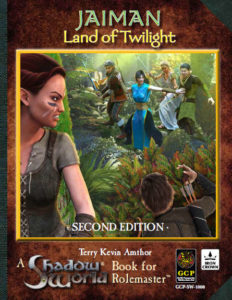 We are thrilled to announce the release of the greatly anticipated second edition of Jaiman: Land of Twilight!

Between the Forbidden Sea and the Barren Waters lies Jaiman, a majestic continent of powerful cultures in conflict. The Forces of the Unlife and the armies of the Dragon Lords seem destined to clash again; Men and Elves must fight or flee.

You can get a pdf copy of Jaiman: Land of Twlight now for a special introductory price of $12 (normal price $18). Don’t wait too long though, this offer won’t last forever.

Print on demand copies will be available in the not-too-distant future.