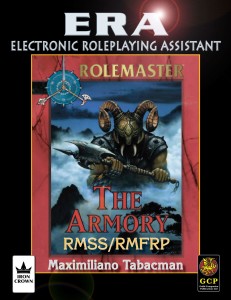 It is with great pleasure that Iron Crown Enterprises is able to announce the launch of two brilliant new add-ons for the Electronic Roleplaying Assistant (ERA) e-support package. Ladies and Gentlemen, meet ERA for Rolemaster RMFRP The Armory and ERA for Rolemaster RMC Armory.

If you haven’t yet tried the ERA package, you can download it for free from RPGNow.

ERA (Electronic Roleplaying Assistant) is the ultimate companion for Rolemaster campaigns. Using ERA players can create their characters using a step by step wizard, then level them up and configure all the details in terms of stats, skills and special abilities, even override the automatic calculations. Afterwards, they can be added to a running campaign in the adventuring module. From there, the game master can control all aspects of the game: resolve maneuvers, resistances, resting, and of course, spell casting and combat.

No adventure is complete without some gritty combat. Blows must be dealt, and damage resolved. While the free base ERA product comes with 2 sample weapons and 3 critical tables, ERA The Armory comes with much more. 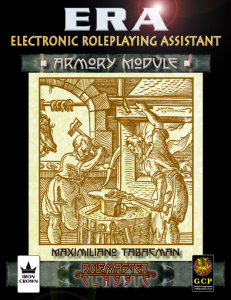 When a simple broadsword no longer cuts it, and the old mace no longer krushes it, the time has come for a different set of tools.

With this package you get the 54 weapon attack tables from The Armory supplement for Rolemaster, along with the 7 critical tables required for them.

Before they get close enough, throw Shurikens, Boomerangs or your own Nodwick henchman. From behind the front lines, use a Military Fork or Man Catcher. And when things get close and personal, switch to the offense with a deadly Katana, or go defensive with a Sai.

ERA is compatible with Windows, Mac OSX and Linux.