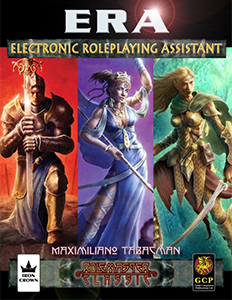 We are thrilled to announce that we have updated and improved all ERA for Rolemaster products with a range of bug fixes and new features.

The ERA e-support package is now even better thanks to a number an update which has now been released.

The changes are as follows:

In addition to these fixes and improvements, there are a number of brand new features including:

If you haven’t already, you can test ERA for Rolemaster by downloading the free web app from RPGNow. In addition you can buy all the database files for RMC Arms Law, RMC Spell Law and RMC Character Law as well as RMFRP Core and Character Law, RMFRP Spell Law and RMFRP Arms Law.

If you already have ERA, you can update your version by re-downloading the files from RPGNow.