Welcome to the fifty-fourth Briefing and the eleventh scheduled Briefing for 2015.

We will be at Dragonmeet 2015 (www.dragonmeet.co.uk, on the 5th December in London) running the “ICE” stand. Copies of HARP, HARP SF, and Shadow World books have been ordered from OneBookShelf, including Tales from the Green Gryphon Inn in softcover and hardback. Assuming all goes well with the Eidolon print masters, we will have printed editions of Eidolon available for purchase as well.

Chris Seal will be donning the GM’s mantle and running a RMU adventure. More details to follow.

We hope to see many of the UK-based fans at Dragonmeet. 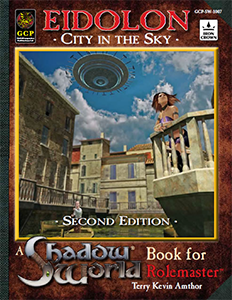 Speaking of Eidolon, the special introductory offer price of 10 USD ends on 5th November, so to take advantage of the deal, please hurry up and use the link below:

Terry has already corrected various errata and updated the interior maps to higher resolution. The cover has also been enhanced. I sent an update message via OneBookShelf but I know a significant proportion of customers switch notifications off, so if you purchased Eidolon before 25th October and you have not downloaded the updated file, please do so whenever convenient.

The print masters were submitted to OneBookShelf on 24th October, so I am hoping to be able to order the proof copies in the next few days.

Also as you may have noticed, we released two Shadow World datasets for use with ERA. One dataset is for RM Classic; the other for RMSS/FRP.

I wrote last month about the two new playtesting boards for RMU and how I am on the alert for dealbreaker issues that would cause significant numbers of existing RMClassic and RMSS/FRP fans to balk at buying into and playing/GMing RMU.

The biggest dealbreaker for many has been the Size mechanics. This has now been addressed by restoring creatures to absolute concussion hits and by replacing the mechanics of multiplying and dividing damage according to size category differential with simply adjusting the critical degree delivered. For those who want bigger creatures to pack more oomph, there will be an optional concussion hit addition, precalculated in the tables. There will also be more unique weapons tables. The development team are currently working on implementing these changes.

Several other issues have also been addressed and solutions proposed, such as available development points and initiative/action points.

Additional areas of (substantial) concern are: viability of random stat generation, profession differentiation and related matters of skill categories and costs, culture differentiation, more varied core races, spell casting penalties for material carried, too many stun types, Adrenal Defense as skill or talent, making item creation in Treasure Law simpler, and random item tables. None of these are full-blown dealbreakers but they do need resolution.

Creature Law as it currently stands is a publishing deal-breaker as it is just too big to be printed. It also has usability issues which require resolution so that it is easier for GMs to use the creatures within it.

On HARP Bestiary, I have been wrestling with the Elementals. Although Elementals were described and statted in the original Something Wicked manuscript for the four elements of Air, Earth, Fire and Water, with explicit stat tables from 1st to 20th level, the stat blocks were too tightly constrained by attempting to be consistent with material that is no longer deemed HARP canon. So I have been trying to liberate the Elementals from this straitjacket.

John Duffield has also handed in a much more fulsome Dragon and Dragon Kin chapter. He is currently statting up his wyverns, dracos, and fey dragons.

The next Briefing will be in December.