Happy New Year to everyone. Welcome to the ninety-second Briefing and the first scheduled Briefing of 2019.

Over the course of 2018, I managed to read Elizabeth Moon’s Paladin’s Legacy quintet, Terry Brook’s Legends of Shannara duology, and multiple Valdemar trilogies from Mercedes Lackey. My holiday reading was the Evermen quartet by James Maxwell and his Shifting Tides quartet. The Evermen cycle features a rune-based magic where spells are inscribed onto surfaces before being invoked through incantation and used by bladesingers for combat and to create multiple forms of constructs. The Shifting Tides is a completely different setting set in an analogue of classical Greece and the wider Mediterranean where ogres, giants, furies, merfolk, sea serpents and dragons are forms taken by shapeshifters – but if they spend too long in the wild form, they lose their humanity and ability to change back.

As we have done since 2012, let us begin our year with a look back at the previous year. We had hoped 2018 to be the partitioned year. It turned out to be a year of delays.

In the convention arena, we had an ICE presence at GenCon for the second time thanks to our friends at Pointy Hat Games and a team of loyal fans, although Terry was unable to attend. The UK team had our fifth stand at Dragonmeet. 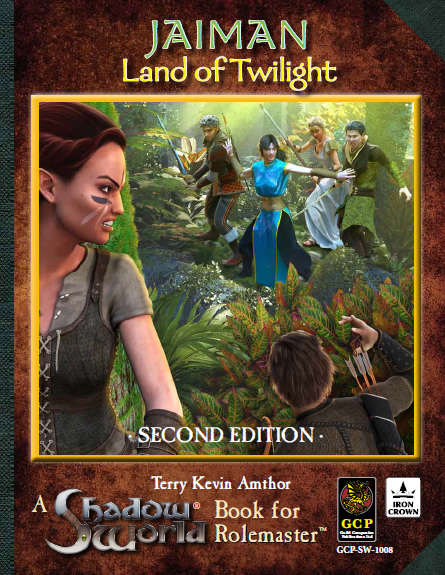 The goal had been to have two, perhaps even three, full Shadow World manuscripts to publication. In the end, only Shadow World: Jaiman: Land of Twilight made it to release.

In HARP Fantasy and HARP SF, the army of freelancers suffered various trials and tribulations so there were no new product releases. However, four manuscripts have reached essentially complete text status and were in the editing queue by the end of 2018.

Software support for HARP and Rolemaster continued through AutoHARP and ERA, with four new datasets being released for ERA.

RMU’s Creature Law refused to reach the much sought-after singularity.

ICE is in discussions with new potential licensees.

One way or another, we are going to bring RMU to a resolution this year. As you know, Creature Law is to be split into two volumes. I have decided that Creature Law volume 1 will be essentially those creatures that appeared in the original Creatures & Treasure product. Everything else including the creature creation materials will have to wait to the second volume for publication. I have also requested the team to indicate what sort of assistance they feel they need to complete the rejigging of creatures.

In the convention arena, ICE will have a presence at GenCon, once again through our friends at Pointy Hat Games. The UK team will also be at Dragonmeet as traders.

For Shadow World, Terry is mostly working on the Haalkitaine manuscript with occasional forays into Emer IV. We would really like to see both of those manuscripts come to publication this year. In terms of other Shadow World authors and their manuscripts, Priest-King of Shade is now in my editing queue, while Lethys is receiving a deep editing pass by a freelance editor.

For HARP Fantasy and HARP SF, 2018 ended with four products in my editing queue. The adventure module, HARP Garden of Rain, and the sourcebook, HARP Subterfuge, have both completed editing. (Finishing the editing on Subterfuge is why the Briefing is so late – I wanted it complete before anything could go wrong with my predictions.) HARP SF Poseidon Gambit is next in the queue, and will be followed by the completion of the editing of HARP Bestiary. HARP Beyond the Veil, HARP Strongholds, HARP SF Vehicles Compendium, Caer Glais (the followon sourcebook/campaign module to Wedding in Axebridge) and Dark Hunt (the sequel to HARP Garden of Rain) are all in progress. I am still quietly working on Something Wicked, Something Wondrous.

For Cyradon, Colin has a long list of tasks to complete on the main Cyradon sourcebook, but I will let him report on his successes as he works his way through the tasks.

Off to commission lots of fantastic new artwork and then some more happy editing. The next scheduled Briefing will be in February 2019