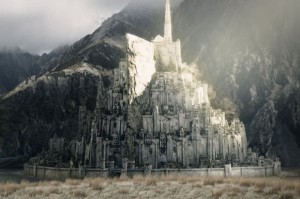 There is an indiegogo campaign underway to build a lifesize Minas Tirith in the South of England.

Cold hard facts about where the giant city will be built, how it will be built and quite what will happen once it has been built are sparse, but the campaign is looking to raise £1.85bn to build a complete, lifesize copy of Tolkien’s famous city from Peter Jackson’s Lord of the Rings trilogy.

Jonathan Wilson who set up the crowdfunding page writes “We are an ambitious team of architects and structural engineers who are passionate about creating a beautiful, inspirational and fully-functioning replica of Peter Jackson’s depiction of Minas Tirith, as seen in his Lord of the Rings films.”

The campaign runs for 60 days (48 left at the time of writing) and offers backers the chance to have guided tours around the city, be commemorated in plaques, name streets and even buy property depending on the size of their pledge.

The sceptic in me isn’t sure that they’re going to make the £1.85bn. The child in me wants to own a home in Minas Tirth. If only I had a few thousand pound to spare.