Well shiver m’timbers if it isn’t international talk like a pirate day! To help you add a hint of the seven seas into your fantasy role playing, we’ve put together a fearsome pirate crew for use in your game of Rolemaster – The crew of ‘The Raven’.

“There are some that say that having a woman on board a vessel is bad luck. I imagine our victims would agree” – Captain Ugak (the fair)

The Raven is crewed entirely by women. With the exception of a few prisoners, men are never allowed to board. Those who board without permission do not live long enough to tell the tale. 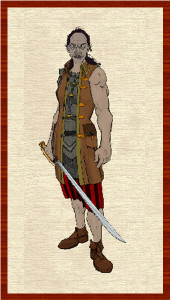 Ugak is a great fighter. Though her crew tell her that she has earned the name ‘the fair’ because she is thoughtful and just, the truth is that rumours of her ugliness have spread far and wide. She cares little for the wealth that being a successful pirate captain brings her, instead she loves the thrill of the fight and the honour of victory. Unlike most pirates, she doesn’t fight dirty. She doesn’t need to and she sees it as dishonourable. Ugak is scared of magic and hates magic users. She believes the use of magic in battle is ‘cheating’ and takes great pleasure in killing magic users as slowly and painfully as possible. She turns a blind eye to the small spells that are sometimes used on board The Raven but hates obvious shows of magical power and will punish users severely if they are caught. 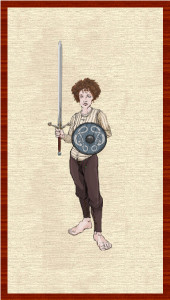 Llewella Noaks is a raging ball of fury. She is very quick to anger and very slow to forgive. She loves bossing people around and has been known to scream and shout at the crew from sun up until sun down. People who make jokes about her size rarely live long enough to regret it. It is when Llewella stops shouting that you know she is really angry. As angry as she can get, Llewella is fiercely loyal to the crew of The Raven and has, on many occasion risked her own life to save others. She is very quick and nimble and is very useful in a fight. Given her stature she is also good at subterfuge and is often sent to follow people or assassinate them quietly when necessary. 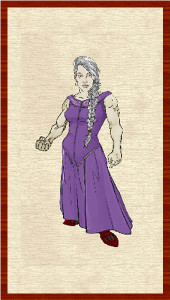 Morgann does not like being at sea and doesn’t consider herself a pirate. She deplores robbery and violence and will only be involved in fighting if it is absolutely necessary. The crew of the Raven saved her from a company of slavers who had abducted her from her homeland. The Raven freed the slaves and dropped them at the nearest port but Morgann felt it only right to repay her saviours by sailing with them and acting as sailing master. Morgann is incredibly intelligent and has a great understanding of maps, lore and navigation. She is a real asset to the crew of The Raven but distrusted by most because of her hatred of violence and looting. Despite her peculiarities, Ugak holds Morgann in very high regard will not allow any harm to come to her. 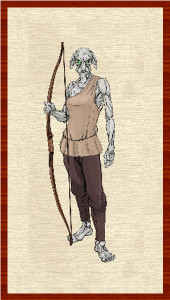 Lysza loves the gold, jewels and wealth that the pirate life brings. As a goblin, she spends the vast majority of her time below deck, out of direct sunlight. Her prowess with a saw and a hammer has seen her take on the responsibilities of both the ships surgeon and the ships carpenter. Lysza has a range of magical healing abilities which, despite Ugak’s hatred of magic, most crew members prefer to ordinary surgery (Lysza has a habit of not cleaning the saws before or after use). During the hours of darkness Lysza will stand on deck during battles and take people out with her short bow. During daylight hours she will peer through a porthole and pick off anyone within range.

Looking for more adventures on the seven seas? Check out Sea Law for Rolemaster, available as a pdf download from RPGNow.