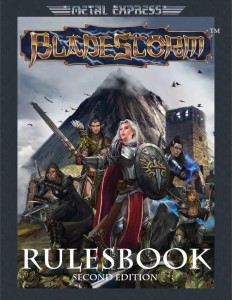 It is with great pleasure that Iron Crown Enterprises can announce that our friends over at Metal Express have now released a brand new, expanded second edition of Bladestorm.

The original Bladestorm was released by ICE in 1990 and was later licenced out to Metal Express who have done a great job in creating a wealth of supporting material and redesigning and reworking the core game.

Bladestorm second edition can be bought from RPGNow for just $19.99 and there is a brand new website and forum for fans to visit and discuss their epic battles and gaming experiences.

Twenty-five years after the first edition was released by Iron Crown Enterprises, Bladestorm returns in a completely redesigned, corrected, colorized, and expanded Second Edition.
The rules enable quick battles between any kind of forces gamers wish to create. Regular troops, heroes, monsters, spell users, standard bearers, units, vehicles, musicians, leaders; if it’s a miniature, it can be turned into a Bladestorm combatant.

Design your hero based on any of sixteen fantasy races. Equip them with weapons and armor from more than 60 weapons and attack modes. Spell users can choose from 222 magic spells within the renowned Rolemaster realms of Channeling, Essence, and Mentalism.

Bladestorm Second Edition enhances regular combatants with a selection of fourteen classic fantasy professions. Each profession is defined by four skills that can be individually developed, offering more than 26 skills to build unique heroes and villains.

These features–and a whole lot more–are ready to bring your adventures to the table.

Bladestorm is a fantasy skirmish-style tabletop game where each miniature represents a hero or monster. The game uses six-sided and ten-sided dice to determine outcomes when attacking, inflicting damage, and maneuvering on the playing surface.

The system is simple and fast-paced thanks to a unique approach to combat situations. When rolling dice to attack another miniature, the result also determines the amount of damage for a successful attack.