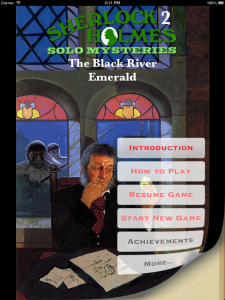 Our friends over at AppEndix have just released: Sherlock Holmes 2 – The Black River Emerald “gamebook” app which is available now from the AppStore!

Sherlock Holmes 2 – The Black river Emerald is both: a book and an interactive app, in which you attempt to uncover the mysterious theft of the famous Black River emerald from the once-exclusive Belton School for boys in Shropshire. Theft, blackmail and attempted murder are not yet part of the curriculum! And if mystery and danger abound, can Sherlock Holmes and Dr. Watson be far behind?

Featuring a fully interactive interface with dice rolls, character sheet, sound effects, atmospheric music dynamically adapting to the story and more, this unique app for iPhone and iPad is now available on the AppStore for just $1.99!

Sherlock Holmes 2 is the second of eight Sherlock Holmes Solo Mysteries gamebooks by Iron Crown Enterprises to be published as interactive apps, including one title which was never available in English before. The app is universal (iPad/iPhone) and multi-language.