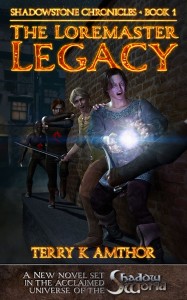 Terry K. Amthor’s Shadowstone Chronicles Book 1: Loremaster Legacy is available now in pdf, kindle and ebook formats at Drivethrufiction or in kindle format directly from Amazon for just $5.99. Get your copy now.

The young nobleman Kalen Avanir, accompanied by his cousin Jad, journeys from his war-torn homeland of Rhakhaan in the north to the canal city of Sel-kai across the sea. On his journey, he discovers a mysterious artifact with strange powers: an amulet with a phoenix symbol, the emblem of his kingdom. Soon, forces for good and evil are drawn to him… and to the amulet. While seeking to understand the powers of the item he carries—and his own place in this tangled net of intrigue, Kalen finds plots everywhere in Sel-kai, and the terrifying agents of the Iron Wind from the north are closing in. Meanwhile, other factions from the Loremasters to the Dragonlords are seeking the amulet and other ancient artifacts with increasing urgency. Kalen must master the phoenix—and his own fledgling magical powers—before it is too late.

Loremaster Legacy is set on the Shadow World, where magic competes against brute force of arms, where political intrigue can be found within every realm, and where warfare between neighbor countries is commonplace.

A few fight against the chaos, led by the Loremasters. Meanwhile, other forces encourage a descent into darkness. Counted among these are the terrifying Priests and Messengers of the Iron Wind.

Then there are the Navigators, who aid in travel and exploration across the treacherous planet. But some believe these guides really only seek the artifacts of the ancient Essaence Lords, the long-extinct race who predate the current inhabitants of this world. It is said that the Lords possessed magic far greater than the mightiest sorcerers of the current day… and something else: technology. Certain groups of the Elves have been experimenting with technology of their own, building mechanical devices and vehicles that fly in the air. Others call this meddling with machines to be dangerous blasphemy, and that it was the cause of the fall of the Essaence Lords.

But perhaps the greatest threat of all to the Shadow World is the very energy that grants the gift of magic; the inhabitants call the manifestations of this the Flows of Essaence. When these flows build up to a critical point, they burst into storms that not only disrupt mundane weather and the powers of those using magic, but also rip open portals to other places and other planes, allowing unspeakable creatures to enter.

Struggling to save their world are a few survivors of the ancient race, and a handful of young men and women just discovering their unusual gifts, and a heavy legacy laid upon them, the Legacy of the Loremasters.

Buy your copy now for just $5.99 from Drivethrufiction or Amazon.